WAB e.V. supports the long-awaited initiative of the Federal Ministry of Economics for long-term framework conditions for offshore wind. A first draft bill of the Ministry for an amendment of the Offshore Wind Act (WindSeeG) envisages the construction of offshore wind farms in the North and Baltic Seas with a total capacity of 40 gigawatts by 2040. With a flexible interim target of 20 gigawatts by 2030 that may be exceeded, the draft law would make it possible to generate more electricity and, eventually, “green” hydrogen from offshore wind and to better achieve Germany’s climate targets.

However, the draft law amending the WindSeeG also contains a proposal for a new tendering model for offshore wind projects, which could considerably slow down the exploitation of Germany’s offshore wind potential at sea. Only recently, the Offshore Wind Associations BWO and WAB jointly advocated the introduction of contracts for differences as a tendering model for offshore wind projects. The stable investment conditions associated with contracts for differences would strengthen the domestic small and medium-sized enterprises, while at the same time relieving the burden on electricity customers. The draft law has not yet been agreed within the federal government. Earlier this week, the economics ministry has initiated the hearing of the states and organisations.

"We welcome the fact that the Federal Ministry of Economics has recognised the importance of long-term planning for the offshore wind industry. The 40-gigawatt target for 2040 contained in the draft bill – ideally combined with an immediate special tender promised in the government’s coalition agreement – would bring back investment security and give the domestic wind industry a fresh start with its experience background," said WAB Managing Director Heike Winkler. "Without the immediate tendering of otherwise unused grid connection capacities, innovative companies and future-oriented jobs will be unnecessarily jeopardized," she added.

Another positive aspect of the draft bill could be the flexibility of the 20-gigawatt target for 2030, which may be exceeded in the future. This flexibility is important in order to tap into climate protection potentials such as offshore wind and to ensure employment and value creation, especially in the challenging current crisis phase. Last year's "Bremen Declaration", which calls for an offshore wind target of 35 gigawatts by 2035, offers a sensible orientation in this respect.

This flexibility is also important so that offshore wind in Germany can contribute to a more ambitious climate target of the European Union for 2030. "We support our Chancellor's plan to reduce emissions in the European Union from the current 40 percent to 50 to 55 percent of 1990 levels by 2030 in line with the European Green Deal. The wind industry as an economic and innovation driver is an ideal partner for this," said WAB e.V.'s CEO Irina Lucke.

"In order to ensure that the 'green' hydrogen sector also has a sustainable future and a long-term perspective, we need a national hydrogen strategy in parallel to the ongoing legislative process for offshore wind before the parliamentary summer break," said WAB Managing Director Heike Winkler. "Wind and hydrogen are ideal partners, therefore the hydrogen strategy should focus on building a domestic market for 'green' hydrogen, with concrete electrolysis capacity expansion plans beyond 2030," said Winkler.

"WAB e.V. is ready for an open dialogue on how the new targets for offshore wind and a domestic market for 'green' hydrogen can be implemented efficiently and safely," said WAB e.V.'s CEO Irina Lucke.

This early-stage draft has the potential to create an urgently needed long-term perspective for companies in the offshore wind industry supply chain.

Potential caption: WAB e.V. has long been committed to a long-term expansion target for offshore wind.

WAB e.V. organises the international WINDFORCE Conference in Bremerhaven, this year postponed to 3 and 4 September. The WINDFORCE Conference has become the central meeting place for the offshore wind industry in Germany during its 15-year history. The WINDFORCE Dinner will offer participants the opportunity to enjoy the company of existing and new business partners in a pleasant atmosphere. 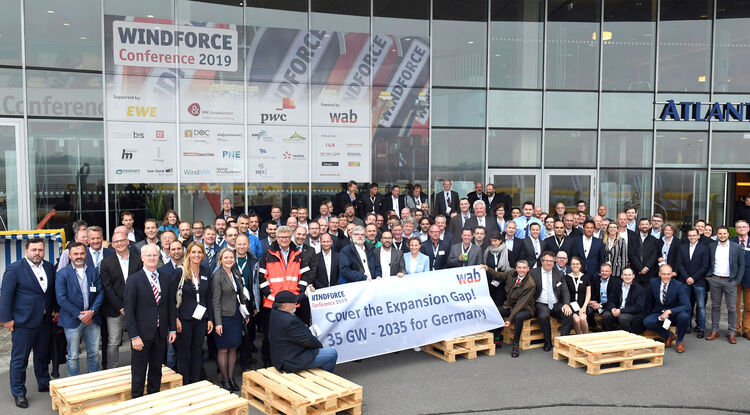