The German Energy Transition must not become an imported product

Bremerhaven, 8 September 2020 - At the 16th WINDFORCE Conference in Bremerhaven at the end of last week, numerous experts called on the Federal Government to correct the course of pending legislative amendments in order to avert further job losses and turnover losses in small and medium-sized industry. At the centre of the criticism are the lack of construction activities in the North and Baltic Seas despite existing grid connection capacities and projects ready for construction, as well as the proposed special course of the Federal Government for a tender model for offshore wind power from 2021.

"A short-term ‚special contribution’ for offshore wind would build a bridge to future offshore wind expansion targets, which we very much welcome. However, it is precisely now important to avoid a ‘thread break’ in the value chain for companies and for their employees. We need to maintain the skills to ensure, together with the companies and employees, the necessary capacities for the future," said Kristina Vogt, Bremen's Senator for Economics, Labour and Europe. The call to implement the "Special Offshore Contribution", as agreed in the coalition agreement of the Federal Government, was also voiced at the conference by Lower Saxony's Environment and Energy Minister Olaf Lies.

"The German supply chain for offshore wind power is threatened in its innovative strength and in the cost-cutting efforts of recent years by wrong political decisions. Further insolvencies, migration and strategic reorientation of smaller and innovative companies without a domestic market in Germany are to be feared and are the consequence of the politically decreed thread breakage," said WAB Managing Director Heike Winkler. "It would be clever, however, to stabilise the innovative supply chain supported by the EEG levy by means of an intelligent immediate measure that has already been promised, so that we do not have to rely predominantly on imports for the later expansion of offshore wind energy and the production of 'green' hydrogen," she adds. "This is obvious in view of the long-term political goal, which deserves a positive mention, and the use of the existing sustainable energy production potential necessary for climate protection," said Winkler.

Another point of criticism: the German government's plans for a future tendering model for offshore wind. Here the model of Contracts for Difference (CfDs), favoured by WAB and numerous other industry associations and already established in other markets, is a viable option. “Growing international markets for offshore wind offer huge technology leadership and export potential for German companies. But there is competition from other European countries which are pioneers in offshore wind such as Denmark and the UK and from countries which are now eager to expand offshore wind and their supply chain such as Poland, France and Spain. Jobs and investment volumes depend on getting the regulatory framework for offshore wind right. To keep attracting investors Germany must introduce Contracts for Difference, the most popular and most reliable model for refinancing offshore wind energy projects”, said WindEurope CEO Giles Dickson, who participated in the WINDFORCE Conference via video link from Brussels. The Lithuanian Deputy Minister of Energy Rytis Kėvelaitis, also online at the conference, also announced the introduction of CfDs in Lithuania and criticised the German government for taking a separate path.

Dirk Briese, managing director of the market research institute wind:research, has analysed in several studies together with other market players how value creation in the wind energy sector has already shrunk in this country in recent years. "With the consistent and rapid expansion of wind energy both onshore and offshore, there is now an opportunity to save tens of thousands of jobs and create thousands more - and this in a country which urgently needs new markets due to the structural crisis in the automotive industry," said Briese. "The wind energy market is one of the few growth markets in the world with an average growth rate of well over 20 percent per year for more than 10 years," he adds. At WINDFORCE, the market researcher presented first results of a current study about wind energy in Baden-Württemberg. "The industrial location of Baden-Württemberg with its structure characterised by medium-sized companies and strong research and development capabilities has good chances to actively develop further value-added potential in wind energy - and thus also to compensate for structural weaknesses in other sectors," he added.

"The energy turnaround with the phasing out of nuclear energy and the conversion of the energy supply to renewable energies is an important step towards a modern, sustainable energy supply and an essential component for achieving the climate policy goals. It is also an important step towards a more sustainable industrial future. However, it must not only be successful in terms of energy policy, but also in terms of industrial policy. If the German wind turbine industry and its innovative suppliers are to fulfil their key role as a domestic technology supplier and employer in the coming years, the course for the future must be set now," said Wolfgang Lemb, a member of the IG Metall board of directors, who also attended a round table discussion on employment and value creation at the 16th WINDFORCE Conference.

The conference focused on the opportunities associated with the development of a market for "green" hydrogen combined with wind power. At the Fraunhofer Institute for Wind Energy Systems IWES in Bremerhaven, conference participants were able to learn about the "Green Gas for Bremerhaven" project during an on-site excursion. "'Green' hydrogen will play a central role in achieving greenhouse gas neutrality in all energy-consuming sectors such as transport, industry and buildings. It can also be easily stored and transported," said Claas Schott, chairman of the H2BX hydrogen network.

The preliminary results include: By 2030, wind energy can create up to 5,000 additional jobs in Baden-Württemberg alone (full-time equivalents). The prerequisites for this development include the implementation of the German government's new expansion plans for onshore and offshore wind energy, including in particular the "South Bonus" for onshore and the grid expansion for offshore wind, as well as the realisation of the plans for "green" hydrogen.

Bremerhaven-based WAB is the nationwide contact partner for the offshore wind industry in Germany and the leading business network for onshore wind energy in the north-west region. The association fosters the production of “green” hydrogen from wind energy. It comprises some 250 smaller and larger businesses as well as institutes from all sectors of the wind industry, the maritime industry as well as research. www.wab.net 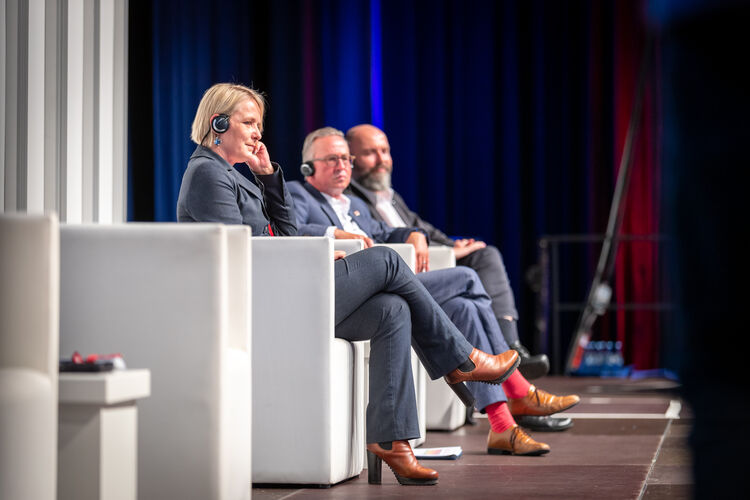