TrueOcean and GABLER on a joint course

GABLER Naval Technology, a company of the Lübeck-based management holding L. Possehl & Co. mbH, is acquiring a 24.9% stake in TrueOcean GmbH. This was agreed by the two parties last week. After the takeover of develogic GmbH in 2021, GABLER Naval Technology could thus take the next strategic step in the transformation to the future GABLER Ocean Group.

TrueOcean and Gabler are already successfully cooperating in the most important maritime digitalization project in Europe, Marispace-X. The industrial project initialized in Schleswig-Holstein forms the basis for maritime digital business models and enables new forms of digital value creation with subsurface sensor data and creates high-tech jobs in the maritime sector in the region and beyond.

"The project and the new partnership between the companies from Schleswig-Holstein are a further driver of the digital transformation in the maritime sector and make an important contribution to its future viability in our state. Schleswig-Holstein's pioneering position in the use and application of AI will be further strengthened. With this lighthouse project, we are creating growth and employment in the blue economy," says Dirk Schrödter, Minister and Head of the Schleswig-Holstein State Chancellery.

TrueOcean GmbH is a software-as-a-service provider specializing in cloud solutions for secure and efficient management of underwater survey data in the offshore sector. "The very dynamic development of the bluetech sector, especially in the offshore wind sector, ensures a continuously rising demand for information and therefore flood of underwater data worldwide which requires a rapidly increasing demand for intelligent BigData solutions. With Gabler's investment, we are now in a position to further expand our structures in a timely manner and to expand our team in order to be able to serve the large global demand in this high-growth segment," says Frithjof Hennemann, CEO of TrueOcean.

GABLER Maschinenbau GmbH, based in Lübeck, Germany, was founded in 1962 and acquired by L. Possehl in 2013. GABLER is the world market leader in the field of mast systems for submarines and thus a specialist in hydraulic-mechanical underwater applications. In addition, the naval and civil product portfolio in the areas of underwater communications was supplemented by the acquisition of develogic GmbH. "The medium-term goal is to transform GABLER into a GABLER Ocean Group, a global player in marine technology, and in addition to the existing business, to make a significant contribution to the sustainable use of our seas in the future," says David Schirm, among others managing director of GABLER Maschinenbau GmbH, describing GABLER's strategy.

GABLER's entry opens up new development opportunities. "We have continuously expanded our service portfolio in recent years. With the Possehl Group, further versatile and promising opportunities are opening up for our company, especially in the field of maritime technology, public authorities and environmental protection," says co-partner and co-founder of TrueOcean Jann Wendt.

"I am very happy that we were able to convince the shareholders of TrueOcean of GABLER's future concept and the Possehl Group's corporate concept and the associated development opportunities. I am sure that with our overall concept we will also be able to inspire and attract other innovative maritime technology companies to the GABLER Ocean Group," says David Schirm. In the future, TrueOcean will continue to develop and implement its own strategy while benefiting from the strengths of a globally positioned group.

The Possehl Group, which operates worldwide under the leadership of the management holding company L. Possehl & Co. mbH, is a diversified group with currently ten economically independent, decentral organized business divisions. The Possehl Group comprises L. Possehl & Co. mbH and more than 200 subsidiaries in over 30 countries. In fiscal year 2021, the Group generated preliminary sales of EUR 4.4 billion. Currently, Possehl has around 13,000 employees worldwide.

The company was founded in 1847 by Ludwig Possehl as a retailer for hardware in Lübeck. Since 1919, the non-profit Possehl Foundation has been the sole shareholder. This corporate structure enables the independence of the Possehl Group and forms the foundation for long-term entrepreneurial decisions.

TrueOcean was founded in Kiel in 2019 by Jann Wendt, Frithjof Hennemann and Onno Bliß. The team offers a smart data management platform for blue economy players. The specialized cloud platform enables digital collaboration by safe data hosting, data management and data exchange as well as near real-time data analysis, provides automated analytics and quality checks, and simplifies the scalability of maritime projects. TrueOcean's goal is to accelerate ocean surveying to support the shift toward sustainable maritime economic solutions. TrueOcean has already received several awards before its product launch, including the Vision Award 2021, and the company was selected by StartUS Insights as one of the "Top 5 Cloud Computing Startups" for the maritime industry 2022. 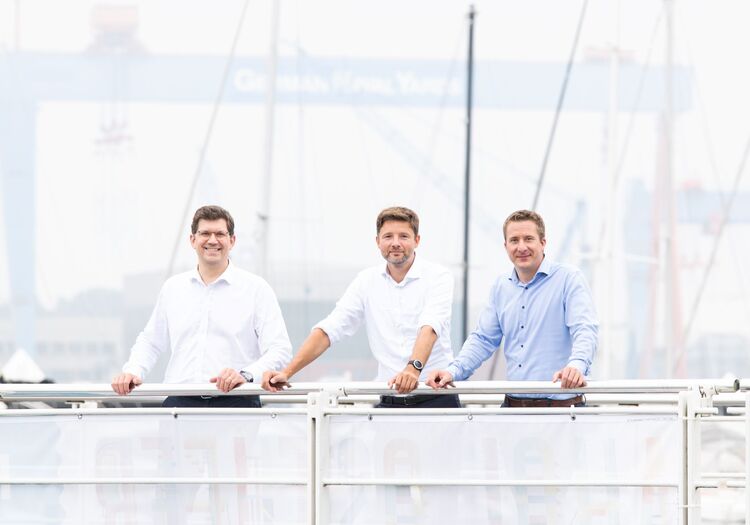